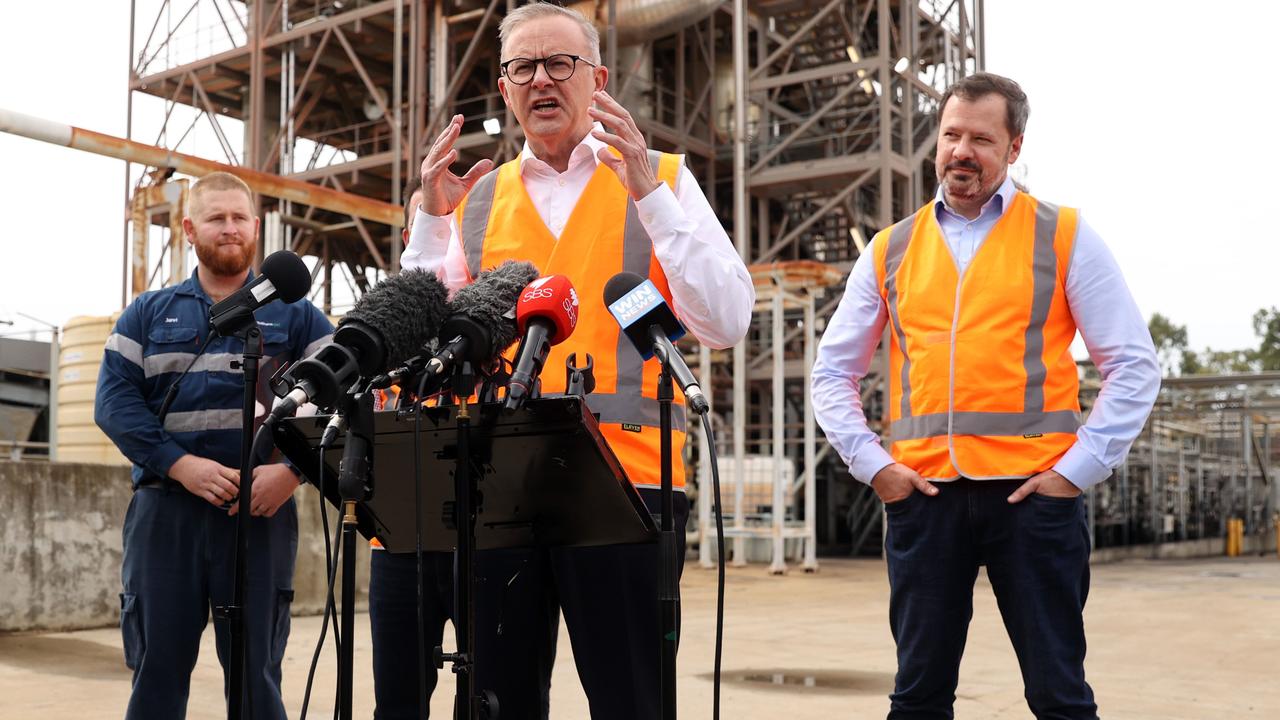 Reporters travelling with Anthony Albanese’s election campaign were this morning given an extended demonstration of how the Opposition Leader deals with interjections and follow-up questions.

A fired-up Mr Albanese got short with a number of reporters while attempting to enforce “some order” at a press conference in Gladstone, Queensland.

“The loudest yeller doesn’t get the first question,” he said a few minutes in, admonishing the press pack for being too loud.

There was a touch of irony to the critique, given Mr Albanese had chosen to hold the event in front of a loud refinery and he struggled to hear multiple questions.

She was seeking to determine what a Labor government would do if the commission decided on a minimum wage rise of less than 5.1 per cent, i.e. lower than the increase in the cost of living.

“The Fair Work Commission is independent of government,” he repeated.

“Hang on, hang on, hang on. Sorry it’s OK, but you don’t get 20 questions. You’ve had two and I’ll answer them.”
Mr Albanese proceeded to say, again, that the commission was independent and he would support a decision that concludes real wages “should not be cut”.

Shortly afterwards he got terse with another reporter, who was again seeking to follow up her question.

“Hang on, hang on. Can we actually get some order, whereby you ask the question and then I’ll answer it,” he said.

“That’s the way these things work, so that there’s some order.”

Prime Minister Scott Morrison’s approach to interjections is less messy, perhaps, though no less frustrating: he generally just ignores them and keeps talking.

During this morning’s press conference, Mr Albanese also accused Mr Morrison of not just ignoring, but actively avoiding the ABC throughout the election campaign, implying the Prime Minister is too scared to appear on the national broadcaster.
“I make this comment,” Mr Albanese said towards the end of his press conference at an oil refinery near Gladstone in Queensland.

(That is what politicians often say before they drop an attack line they believe, correctly or otherwise, is the political equivalent of a hot new single.)

“I thank Channel 7 for hosting last night. And I also thank, previously, Channel 9 and Sky News for hosting the three debates that we’ve had,” the Labor leader continued.

Mr Morrison did in fact give an interview to Sabra Lane on ABC radio last Thursday, and I believe he has gone on News Breakfast as well, so he has not avoided the national broadcaster entirely. But those appearances were rare exceptions to the trend, with the PM very much prioritising commercial TV and radio.