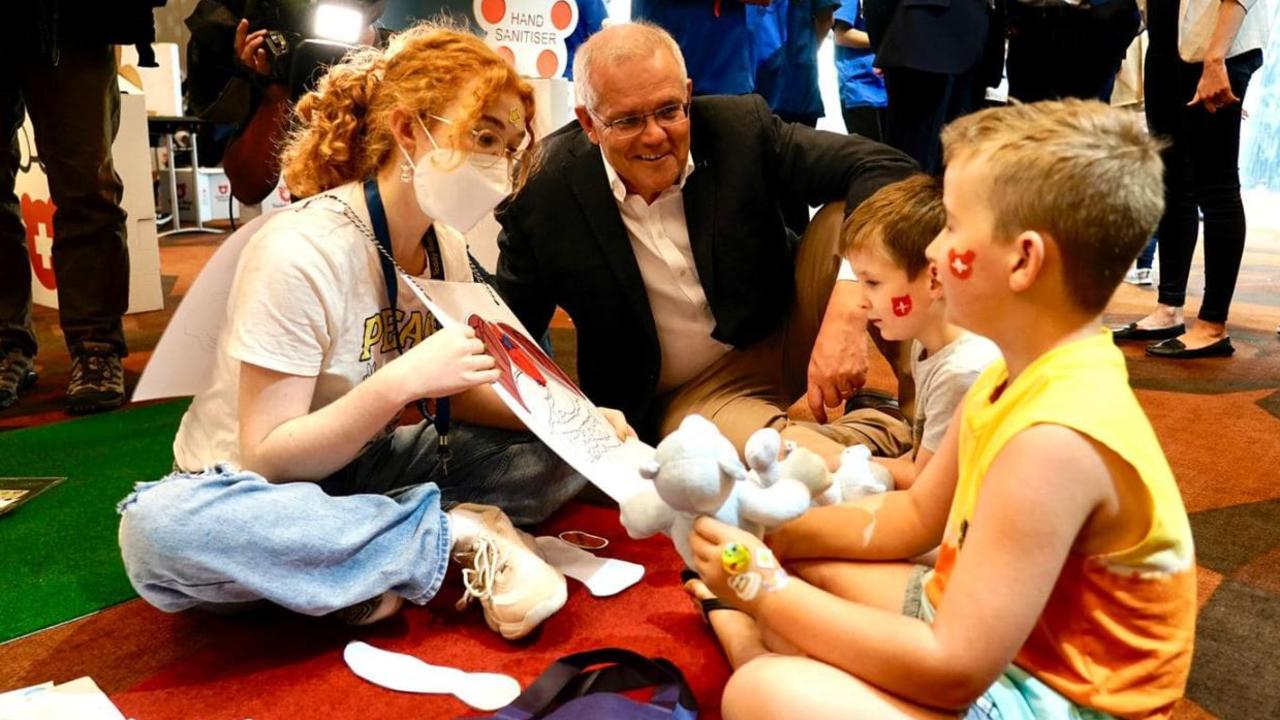 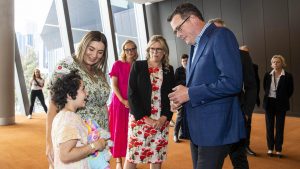 The Prime Minister has copped criticism online for not wearing a mask to a benefit event for sick children.

While Victorian mask rules did not apply, online commentators questioned why the Prime Minister didn’t cover his face when being physically close to the children.

Victorian Premier Daniel Andrews was also pictured at the event interacting with a child without wearing a mask.

The event recommended visitors mask up whenever physical distancing was difficult.

“Please bring a mask with you (especially if you are catching public transport), and wear it anywhere you find it difficult to social distance,” event organisers wrote on the Good Friday Appeal website.
A spokeswoman for the Premier said no rules were broken.

“Every attendee of the press conference was following the current Covid settings,” she said.

Victorian state mask rules were changed on February 25 to only require face coverings in certain situations.

The places where masks are still mandatory include public transport, hospitals, courts and many school settings.

Attendees at the Melbourne Convention and Exhibition Centre are not required to wear masks under the rules.
The Prime Minister‘s Facebook post said: “Great to visit the Royal Children’s Hospital Kids Day Out Good Friday Appeal this afternoon in Melbourne.”

“Our Government is giving $2 million to the appeal to help fund new research, equipment and care programs for sick kids.”

Some people reacted in the comment field to Mr Morrison’s uncovered face, some of whom were apparently under the mistaken impression the event was held at the Royal Children’s Hospital.

A hospital spokeswoman said neither of the pictures was taken there and that no RCH patients attended the event.

“You visited with sick kids but didn’t wear a mask? As the mum of a little girl with high and complex medical needs, this horrifies and angers me,” one person wrote in response to the Prime Minister’s post.
Others applauded Mr Morrison for bringing attention to the cause and committing funds to support the Good Friday Appeal.

“This isn’t just about backing the doctors, nurses and carers who make such a difference, it’s about supporting the services that help these young patients’ families too,” Mr Morrison said in a statement on Friday.

The Premier and Prime Minister were far from the only ones to go maskless to the event, with pictures from the exhibition centre showing mostly bare faces.
However, one woman who was captured in one of the photos the Prime Minister uploaded was wearing a mask.

The Good Friday Appeal raised a record-breaking $22,328,154, which will help fund the Royal Children’s Hospital.

Mr Andrews was previously fined $400 for not wearing a mask on two occasions in 2021 when doing so was mandatory.

The Prime Minister’s office has been contacted for comment.