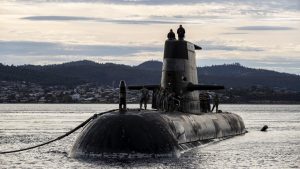 leader Xi Jinping has made his next move in a rare appearance after Australia signed a historic deal dubbed a “major step” in its nuclear submarine partnership with the US and the UK.

On Monday, Defence Minister Peter Dutton signed a formal agreement in the first stage of the controversial AUKUS deal towards acquiring nuclear submarines.

Mr Dutton appeared in a ceremony alongside US Chargé d’Affaires Michael Goldman and UK High Commissioner Victoria Treadell for the pact, which means the US and UK can now share secret information on the vessels with Australia.

Prime Minister Scott Morrison said the purpose was “to establish a legally-binding framework for the disclosure and use of information related to naval nuclear propulsion amongst the Governments of Australia, the United States and the United Kingdom”.

“This is the first time that the US and UK will have shared this information with a third country, ever,” Mr Morrison said in Canberra.

Overnight Xi appeared in an online summit with ASEAN leaders and boldy claimed Beijing is ready to sign a Southeast Asia nuclear weapon-free treaty in response to the deal.

“China supports ASEAN’s efforts to build a nuclear weapon-free zone, and is prepared to sign the Protocol to the Treaty on the Southeast Asia Nuclear Weapon-Free Zone as early as possible,” Xi said.

Xi joined a number of senior Chinese officials who slammed the pact, including Zhao Lijian, who claimed the agreement will “intensify regional tensions, provoke military arms race and threaten region peace and stability”.

The Southeast Asia Nuclear Weapon-Free Zone is an agreement signed in 1995 between 10 Southeast Asian member-states and also known as the Bangkok Treaty. China is not one of those 10 members.

In a nutshell, the treaty stipulates its members cannot “develop, manufacture or otherwise acquire, possess or have control over nuclear weapons”.

A protocol for the treaty was issued for five nuclear nations — China, Russia, France, the U.K. and the U.S., according to the United Nations. None of the countries have signed the agreement, making China the first of the five parties if Xi follows through.
Xi’s words are in stark contrast to a recent Pentagon report which claimed Beijing was likely to double its nuclear arsenal in the next ten years.

“Beijing’s decision was likely made with AUKUS in mind, as the trilateral agreement allows Australia to receive nuclear propulsion technology to power a new fleet of submarines,” Nikkei Asia’s Shotaro Tani explained.

“Xi’s comments will ratchet up the pressure on Australia, a nation with which China has an increasing antagonistic relationship.”

“China declared its readiness to sign the Protocol to the SEANWFZ Treaty.”
Mr Morrison said the pact will “provide a mechanism for Australian personnel to access invaluable training and education from our US and UK counterparts, necessary for learning how to safely and effectively build, operate and support nuclear-powered submarines.

“It will enable Australian civilian and military personnel to receive access to critical training and education from the United States and United Kingdom counterparts, necessary to learn how to safely and effectively operate a capability for Australia.

“The Agreement will also enable Australia to develop the necessary skills and knowledge to create a world’s best practice regulatory and safety regimen to guarantee the safe operation of nuclear, naval nuclear propulsion, and ensure compliance with Australia’s international obligations, including under the Treaty on the Non-Proliferation of Nuclear Weapons.

“This is, this is an important, a very important agreement for Australia’s future security.

“There are plenty of, there seems to be plenty of others who don’t want to see this go ahead. I think that tells you why it’s so important that we do.”

At the signing, Mr Dutton called it “remarkable achievement” as Australia looks to replace its ageing Collins class submarines.

“I’m incredibly proud of what we’ve been able to achieve under AUKUS and this agreement today will allow for the first time ever, the sharing of information, particularly in relation to nuclear propulsion system of the submarine to be shared with Australia in a way that’s only been shared between the United States and the United Kingdom up until now,” Mr Dutton said.

The deal, first announced in September, caused an international headache for Scott Morrison, with the prime minister sensationally rebuked by Emmanuel Macron after the French president called him a liar.

Mr Morrison told reporters in Glasgow he would not “cop slurs” about Australia’s integrity and that he made no apology for his decision to abandon a $90 billion submarine contract with France for the deal.

Mr Macron accused Mr Morrison of lying by not revealing that Australia had been in talks with the UK and US over the acquisition of nuclear submarines before he pulled out of the French deal.

Mr Macron made the extraordinary comment to Australian reporters at the G20 summit in Rome, after weeks of escalating diplomatic tensions between France and Australia.

“I have a lot of respect and a lot of friendship for (Australian) people,” he said.

When asked if he thought Mr Morrison had lied to him, he said: “I don’t think, I know”.
In response, Mr Morrison said he did not wish to “personalise the spat” but would not accept “statements questioning Australia’s integrity”.

“I don’t wish to personalise this,” Mr Morrison said.

“There’s no element of that from my perspective. I must say that I think the statements that were made questioning Australia’s integrity and the slurs that have been placed on Australia, not me, I’ve got broad shoulders. I can deal with that.

“I can deal with whatever people throw at me. But Australia has a proud record when it comes to our defence capability. That’s why we will be building these. We’ll be building others. And Australia’s service record, I think needs no elaboration. And so that’s where we are.”

He said the conventional diesel submarines that would have been built under the deal with France would not have met Australia’s strategic needs.

“I have to put Australia’s interests before any interests that involved potentially offending others,” he said.
“The (French) submarine contract was a significant investment decision taken five years ago. At that point, given the strategic circumstance, time and technology available to Australia the attack class submarine was the right decision.

“But there have been significant changes that have occurred in our strategic environment in the Indo-Pacific, which completely changed the game.”